In recent years, the art of fudge-making has fascinated me. My mom has a classic recipe passed down to her from her mom and everyone has these easy-peasy recipes involving condensed milk and a bag of chocolate chips and the microwave.  But my grandmother’s recipe was also one of condensed milk, and my husband’s grandmother makes her fudge with marshmallow creme and as decadent as these goodies are I wanted to get down and dirty and make fudge the way people without supermarkets made fudge. No shortcuts, just blood, sweat, tears, and chocolate… with preferably only the last one in the treat.

Why do I want fudge this way when modern conveniences allow otherwise? Because I am weird like that and if you’re seeking out the old-fashioned theory of fudge you probably understand.

I first learned of this old-fashioned “other way” when I obtained a copy of Amish recipes from a Freecycle exchange. And the Amish… oh! I may not agree with their theology or, heck, a good much of what they do and how they live, but I have to respect such a humble people of hardworking values. Besides, I have a thing for those Amish romance novels. In the end, old-school, totally American, Amish fudge!

The book boasted two recipes and I tried both several times over the course of several years. And I failed. Miserably. I would either burn the fudge or, more commonly, wind up with a sticky taffy-like mess.

I eventually went to the internet. I looked at other old-fashioned fudge recipes. I read in detail about how they made it, the cooking process.

Eventually, I came up with this recipe, heavily based on those two Amish cookbook recipes and my grandma’s recipe. It’s smooth, it’s creamy, and it takes a fair amount of patience and elbow grease. The fudge tastes all the sweeter for it.

1 tsp vanilla extract (or other extract of your choice)

Take a good sturdy and heavy-bottomed pot, something that won’t accidentally burn your fudge and lavishly butter the sides. Combine milk, sugars, chocolate, corn syrup, and salt and cook over low heat, stirring constantly. From what I gather, low heat, about a 3 or a 4, is the best way to go. Low heat and slow pace here.

Now remember, you are stirring pretty much constantly. And you will be doing this for awhile. I am not kidding. Reserve the better part of an hour to just stir that chocolate mixture. 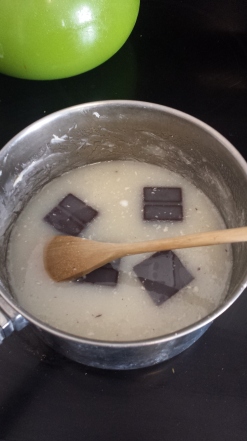 I did not chop the chocolate; really, it melts faster if it’s smaller.

So, yeah, you are taking about 45 minutes if not longer to just stir this mixture until it starts boiling. So, breathe in and breathe out. Meditate on the chocolate goodness. Watch the smooth dark liquid in your pan. Be mindful of it. Or watch Netflix. I won’t say what I do and I won’t judge the choices of others.

Just make sure you are more or less constantly stirring this. You want to get the sugar to dissolve into the milk before it boils and yeah, the stirring helps with this.

For a time your pot may seem like it’s holding milk with chocolate specks, but it gets all smooth and glassy.

Eventually, we get some boiling action. When it starts boiling, you can put down that spoon and rest your stirring hand. From here to a step near the end, just stir occasionally. Remember to keep the heat low, and let that stuff boil away.

After about five minutes I recommend checking the temperature. As you may or may not know, there are two main ways to check the temperature. If you are using a candy thermometer, you’re waiting for this to get to 234-236 degrees. I don’t have a candy thermometer. I used to, but it had a bad run-in with a sink full of water and now I don’t have one anymore. That’s okay. It was free and I think it was off anyway. But many consider a thermometer to be a great piece of modern technology.

The other way is the soft ball method. Get a bowl of cold, cold water and drip some fudge sauce into the water. Quickly gather up that fudge. If you can roll it between your fingers to a soft ball that holds its shape for a few seconds but also collapses or falls apart after a few seconds, you’re golden. It’s a tricky system to master, but after a few recipes trying this, trust me, you’ll probably have that inner knowledge of what to look for. It’s also super old-school.

When you deem your fudge ready, remove it from the heat and toss in the butter and extract. Vanilla is traditional and tried-and-true, but use whatever you want. I know people will put a drop or two of essential oils in as another option. I recommend you don’t stir these in, but rather let them melt atop and seep in.

Now, the mixture cools. This also takes time. Once I made fudge while First Gem was at preschool fifteen minutes away. I let it cool while I went to pick her up, a half-hour round trip not counting the adult chat time with her teachers. Some suggest putting your pot in a frying pan of ice water. During this time, butter a pan for your fudge.

When the pot is lukewarm to the touch, you’re ready.

Now, recall you you spent all that time stirring and stirring and watching for the darn pot to boil? Get ready to again exercise patience and fortitude and strength.

If you’re adding marshmallows, you may do so for a creamy marshmallow bit. Or you can add them later for marshmallow chunks. I added them first and this picture is downright nauseating, but the result was tasty. Marshmallow chunks or not, do you see how shiny the mixture is?

We don’t want it shiny. 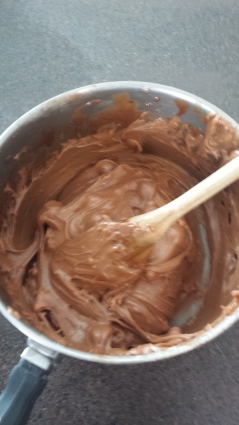 When it’s gone, you can add marshmallows or nuts or whatever you like and dump it all into your buttered pan. Smooth it out and let it set. 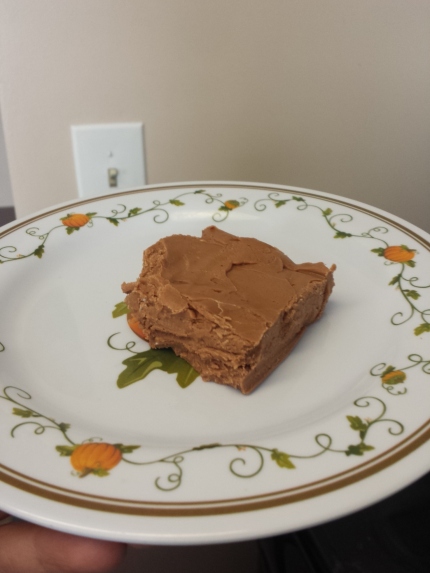